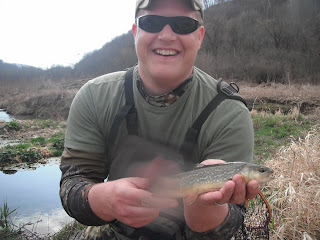 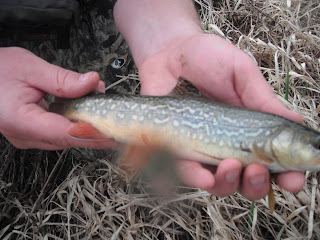 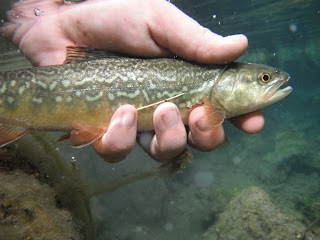 Year round fishing and no trout stamp?

Some interesting questions will be rised during this years spring hearings. One of these topics will be to get rid of the salmon and trout stamp program and just roll these costs into one fishing license fee. They are also looking into having no closed gamefish season....... And not to mention a Sandhill Crane hunt.


What are your thoughts?

More info at the link below 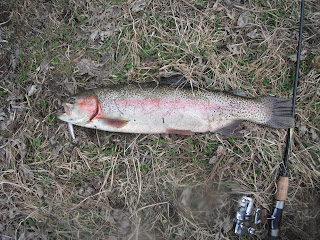 Landed a nice Rainbow !22 inches and a chunk.

Also caught 7 Browns and 1 more Rainbow in one hour.

Got out today for 2 hours and it was a total bust! Caught four 13 inch browns. Wind drove me nuts....... Guests had to have gotten to 40 mph. The high sun also didn't help but whatever I did find some nice spots to jump shot ducks this fall.
I started out fishing Trout creek in Iowa County. Years ago this was a great stream and now I can't say the same....... Very disappointing to see what has happened to this system. Where the creek use to have a great hard gravel bottom now is buried under slit and sand. This creek needs some major rehab to return to glory.
After that I just drove around to do some scouting. Found one new stream that might have some potential but we will see.

On a side note I did see a Fisher Cat! Third one I've seen in two years in Southwestern WI. Much like the Black Bears they also must be expanding their range. Sandhills cranes are starting to reappear in large numbers. Also saw a huge coyote and turkey, deer and 1 pheasant.

I hope I can get out and fish tomorrow night for and hour or two.
Posted by Inland Sweep at 8:20 PM No comments:

Well it is finally here! I was able to head west on Saturday with my uncle, cousin, and two friends on Saturday. I split everyone up into teams of two so we could cover a lot of water and come up with a good pattern. I fished with my friend Tony and we targeted headwater streams to hopefully keep us out of the 25 mph winds!
The first couple pools the fish wanted NOTHING to do with the panther martins we offered. We made a quick change and switched to a brown trout ultra lite minnow (2.5 inches). That was the ticket! From that moment on things were on fire. Tony ended up that section with 22 Browns and Brookies and I had 33. Hoping everyone else found fish we drove up stream to pick up my cousin and uncle...... They fish with spinners about 90 percent of the time so I was worried that they were experiencing the same scenario that we did. I asked them "well what's the word?" they responded back "pretty good! I even caught the sweep!"..... Boy was I happy for them! I was my uncle's first time trout fishing this early and I was worried because he HATES the cold.
They ended up catching about 14 each with most of the luck coming from a beaver pond that was created over the late fall.

Well it's only 10:30 my uncle says "let's go fish some more." Hearing that come from his mouth was unreal...... He thinks 50 is too cold now here he is with 25 mile per hour winds and temperatures in the upper 20's wanting to fish more. I think it is safe to say he has officially caught the trout bug.

They wanted to go fish the Blue River another 25 minutes away and I warned them there will be 100 other fisherman there and they should stick with the smaller systems. They wanted to go chase some brooder Rainbows we saw during deer season below a bridge. Tony and I headed to check out a new stream much closer in Iowa County. I typically don't fish new water on opening day and frankly think it's a dumb idea to even try. But needless to say we did and I sure am glad! Brookie and big brown heaven in a small beautiful stream. On that section we stopped counting fish after about 20 per person. Caught a bunch of really nice browns and Brookies and had a couple bigger fish swipe at the lure. Average Brookie was 11-13 inches and the Browns were running 14-17.
The group that went to fish Blue River said there was a ton of guys out (go figure) and they each caught about 5 browns each.

All in all a great opener considering the weather!

Sunday..... I need to get a 20 incher......... My first trout last year was a long 24 inch Brown. And the football 18.5 in brown I caught Saturday just didn't cut the mustard for me. I need a 20 I kept saying.
I get up and fish Western Dane County on a stretch of stream I've caught dozens of 20 inch class fish before. Typically I fish near springs or upper headwaters in the early season near consistent water temps. Just a couple degrees can turn fish on or off this early in the season. I fished the lower section having some luck in the past this early just 3 years ago I caught a 22 inch Brown opening weekend here.I fished the entire section and caught 5 browns and one 19 inch Brown...... Damn it I thought for sure he would bust the 20 mark when I saw him hit. No 20 incher for me this opening weekend but a great time fishing with family and friends and enjoying this beautiful state we live in. 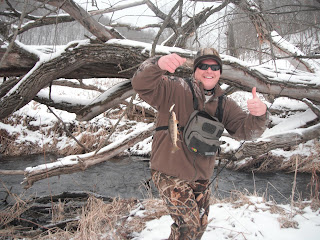 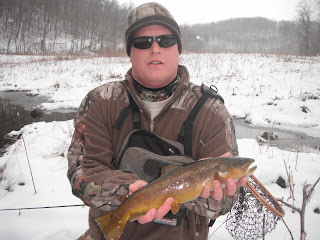 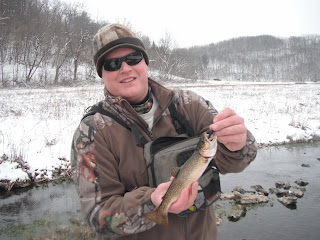 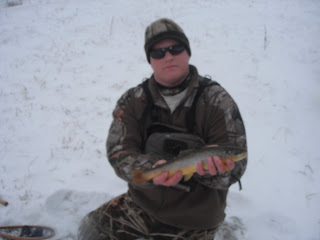 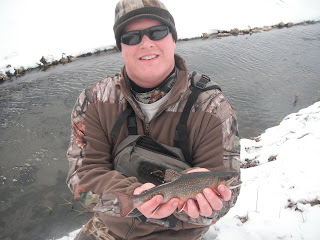 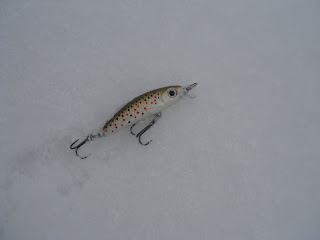 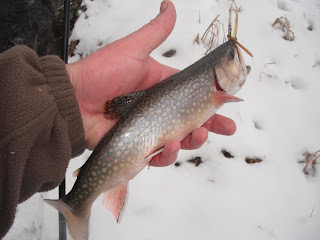 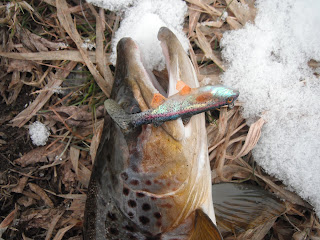 Checked 4 streams today in Western Dane County and I'm happy to say that conditions have improved! 3 or the 4 stream only had a slight stain but fishable. We are under a winter storm watch for Friday with 4-8 inches of snow forecasted. I am happy to hear snow and not another dousing of rain that would threaten the opener.

It will be very interesting to see how active the fish will be since we have been under a very active weather pattern this week.
Posted by Inland Sweep at 4:50 PM No comments: